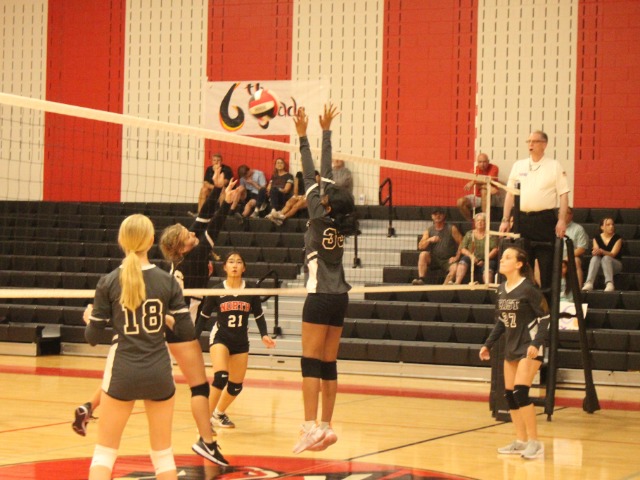 It was an exciting night at East as the 8th Grade Lady Broncos took on their rivals, North. C- Team gained their 2nd win of the season, defeating North in 2 sets. Kendall Graves led the team in serves, having a combined 22 serves in both sets. Mia Schuller dominated on the front row with consistent blocking and hits out of the middle. Ella Sokolowski and Diya Dasari also contributed on the front row with great defensive coverage and tips. Together the C-team played a great game with teamwork and communication. Players of the game goes to Kendall Graves for her serving that kept C-team in the lead; Ella Sokolowski for her aggressiveness and quick coverage on the front row.

B-Team gained their 5th win of the season defeating North 25-19 in the first set and 25-18 in the second. Molly Crawford led the team in serves, with 12 consecutive serves during the second set. Lauren VanPelt got the crowd off their feet with her amazing block against North’s outside hitter. VanPelt also had 2 offensive kills along with Laney Bass and Avery Easterling. Quick movement on the back row from Dani Green, Claire Keith, and Rylee Davis helped the Lady Broncos keep the lead. Players of the game goes to Lauren VanPelt for her amazing defensive block; Rylee Davis for her quick defensive skills on the back row.

The A Team had another impressive game working together and putting points on the board. Ava Clower had some awesome hits from the middle and Leah Drake had great passes as the new libero. We continue to grow as a team and we are looking forward to taking on Argyle next week! A Team player of the game goes to Finley Penniman. She was a beast at the net with multiple blocks and hits in her first A Team appearance of the season!