The ladies of East took on West last night in the first in-town rival game of the season. We had many things we wanted to focus on to improve our game and these ladies sure did a great job!

C-Team started the night with a back and forth game against a scrappy West team. As the game went on the Broncos focused on controlling the ball and making good passes. With their ability to play great defense and rebound they started to pull away. With almost everyone putting points on the board they got to add another Win to their record as they go into the final week of this basketball season with a winning record of 6-2. Score of the game was 32-18. Players of the game go to Lily Dontos, Binitta Nitto, and Mirabel Cole.

B-Team came in and made a statement right away to why they are 6-1 in their zone going into the game! They were quick to make fast transition baskets and take advantage of bad passes by West. Molly Crawford was on fire shooting the ball and ended the night with 10 points. Finley Penniman was quick on defense to get on loose balls and grab rebounds. They hit the court running and never looked back. They take another win with a score of 49-14. Players of the game go to Laney Bass and Diya Dasari.

A-Team came in off a strong win against Carroll last week. They were ready to get back to the court. They took time to control the ball and make smart passes. From the jump ball they took tempo of the game and dominated the West Wranglers. Everybody was able to contribute on offense with baskets and was able to handle their job on defense. Prisha Kolhe was hitting all her shots and ended the night with a season high of 19 points. Mallory Cooper was able to lock down on defense and transition the ball to the basket after and got herself 12 points. This team is now 8-0 as they go into the last competition of the season against North. This game will be so important going into the District Zone tournament. Player of the game goes to Skylar Hill for her domination on the floor and dropping 16 points. Final score was 76-13!

Awesome job Lady Broncos! We look forward to the final game of the season at North to take on the Cougars! 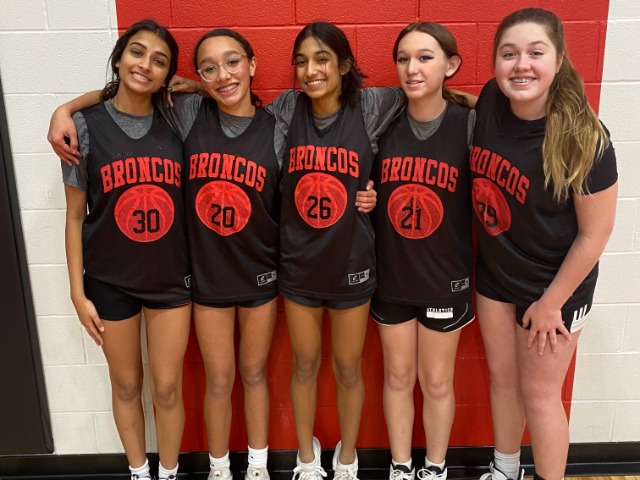