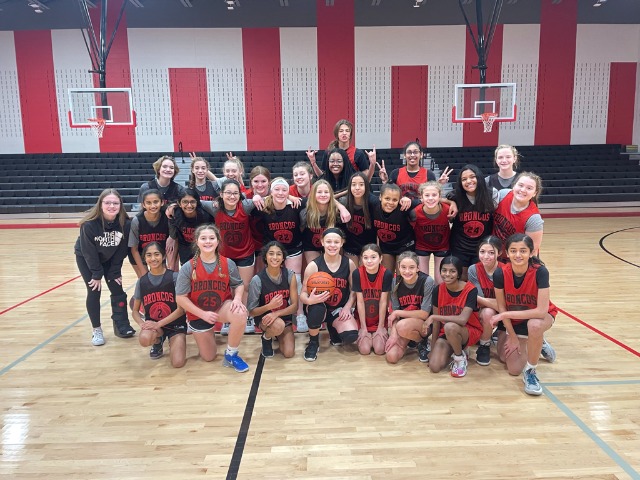 Last night the 7th grade Lady Broncos took on the Lady Dragons of Carroll. This has been the most anticipated game of the season! We had an awesome show out of support from family to students. We sure did put on a show for them.

C Team started the night off with quick ball movements and ability to press the Dragons. They played aggressive offense and defense and was able to dominate the court. Lead scorers are Claire Keith and Emma Praytor with 6 points each! They took another win with a score of 30-10. Players of the game goes to Talia Furler and Saanvi Somani!

B Team was ready to go after watch the C team finish strong. It was a fight for the ball right away but the Lady Broncos came out on top. Playing the best press defense we have seen all season they were able to break away. Lay up after lay up gave the Broncos a huge advantage. The Dragons never had a chance to catch back up. Your top scorers were Finley Penniman and Adwitha Challa a.k.a Rocket! They each had 8 points and had amazing chemistry finding each other down court for the easy score. B team finished strong with a dominating score of 36-6. Players of the game are Ava Clower and Finley Penniman!

A Team was looking forward to taking on their biggest competition of the season and they did not disappoint! This game was one for the books. The game started intense with Carroll taking the lead after the 1st quarter. The Lady Broncos kept fighting and the game continued to go back and forth. As the 4th quarter came to an end the score was tied 38-38. The first OT of the season was upon us! They fought until the very end, but once again OT ends with a tie. Score is 45-45 and it was time for sudden death. Eme Holder gets a finger on a pass to deflect it. It falls in the hands of Prisha Kolhe who takes a couple dribbles towards the basket and takes a shot. As she shots she is fouled but it doesn’t matter. Her shot goes in and it wins the game for the Broncos!! Mallory Cooper lead the team with 13 points and Lauren Van Pelt dominated rebounding. Player of the game goes to Prisha Kolhe with her hard work and amazing game winning shot! A team remains undefeated with the win against Carroll. The final score was 47-45!

We are so proud of ever single one of our players. They fought their hearts out and came out with wins! We take on Coppell Middle School West next Thursday at West. If you haven’t been to game please come out and support these young ladies!