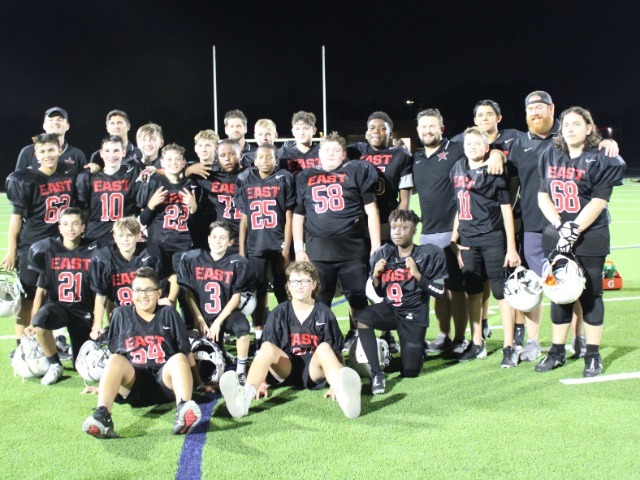 The 7th grade East Broncos played their final game against CMS North on a beautiful but warm Monday night.

B-team battled hard against the Cougars as they responded to a North TD with a recovered fumble on defense. The next play Chab Kahungu orchestrated a reverse pass by handing the ball to AJ Pagan, who completed the pass to Johnny Meyer. Jacob Narez had another great game on defense and Ridge Lawrence played both sides of the ball well. AJ Pagan had a big interception late in the first half to add to a big performance. The Bronocos fought valiantly but couldn’t find one last score as they fell 13-6. Star of the Game is AJ Pagan for making big plays.

East’s 7th grade A team had not defeated North since 2016, but the Broncos were determined to change that trend. After a stout defensive stand from the Broncos, Jackson Echols housed a 68-yard touchdown on the first offensive play thanks to massive blocks from Lincoln Gardner and Eric Anguiano. The defense played solid the entire night thanks to big plays from Jason Medrano, Johnathan Yowell, Jacob Calvin and Diego Rodriguez. Fast forward to the 4th quarter and the Broncos leading 8-0, the Broncos made their best defensive stand of the season with the ball on the 2-yard line. After a big stop on 4th down, Jackson Echols housed a 90-yard touchdown to seal the victory (the safety that tried to tackle Echols is still looking for his ankles right now.) The Broncos triumphed in their final game 16-0. Stars of the Game are Andy Telling for orchestrating the offense and Jackson Echols for being a stud.

Congratulations to the 7th grade on a STRONG finish to the football season!