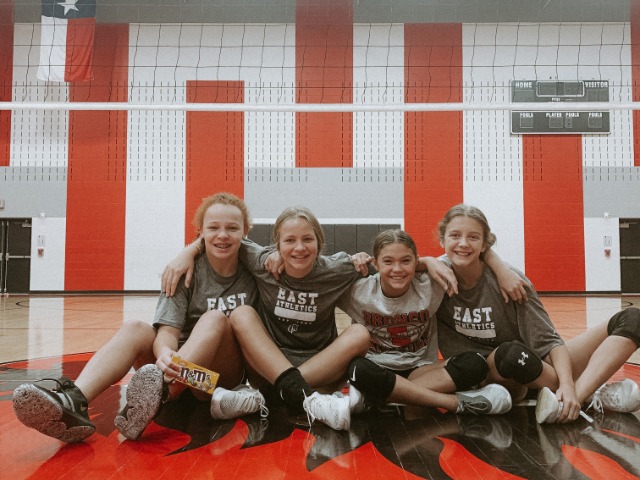 The Lady Broncos faced off with the Lady Dragons of Dawson on Thursday night. Coming off a loss from last week, the C- Team was determined to get a win in their home gym. However, Dawson’s offense seemed to be too much for the Lady Broncos and they lost the first set 18-25.

With the help of the supportive East student section, the team held up a good fight during the second set. Emery Staab and Rylee Davis had a total of 13 points combined from serving. Mallory Cooper and Delaney Flaherty showed their defensive skills by recovering hits made by Dawson. The Lady Broncos successfully won the set 25-13.

The team fought long and hard during the 3rd and final set. They were behind 10 points but didn’t let that stop them. They went point for point with the Dragons but in the end fell short, losing the set 11-15.

Motivated once again by the East student section, the B-team was determined to gain another win tonight. Emeline Holder gave the team their first serve of the night, but missed the serve. The team quickly recovered and Bethany Liebert raised the team’s score 4-6 with her serves. Ashley Hall also contributed to the Lady Broncos’ score with great passes and hits. However, the Lady Broncos’ efforts proved not to be enough, and the team lost 11-25.

A Team played a great game against a tough Dawson offense. The girls worked together on digging up those down balls and retrieving balls all over the court. Our Libero's Claire Keith and Madison Taylor worked thier tails off on the back row. Madi Alvarado and Laney Bass were such leaders on the court always knowing where they should be and being helpful teammates during a rotation check. The player of the week is Sage Engelhart for her tough serves, consistent hits, and her constant positivity on and off the court.

Players of the Game:
A Team- Sage Engelhart