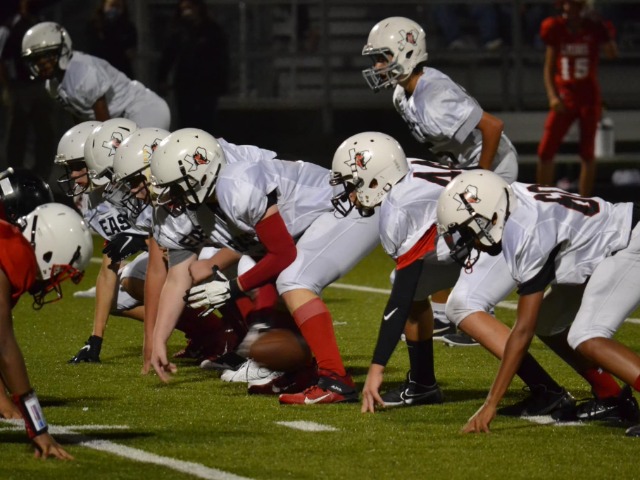 B team defense won the night thanks to tough play and hard tackling from Will Ballard, Ashmit Aggrawal and Blake Isbell. Newcomer Jackson Chen and hardened veteran Jacob Vo led a dual-headed running attack, with Chen ultimately punching in the Broncos only touchdown. Bryson Patten, who also had a key interception, converted on a high-stakes two point conversion to give East the lead and game-winning score as the Broncos triumphed, 8-7. Player of the game is Bryson Patten.

A team stampeded Vista Ridge from kick off and never looked back, taming the Lions 38-6. Edward Griffin led the unstoppable Broncos offense, which scored on every drive, with 4 total TDs (3 through the air and one on the ground). East jumped out to a 22-6 lead at the end of the first half thanks to a pair of touchdown catches from Tucker Cusano and another from Myles Howard. The offensive line, led by Oliver Gabriele, Hogan Maxwell, Brock Mitchell, Keegan Moore and Joaquin Oaxaca locked down the Lions.

The Broncos were lights-out defensively, allowing only 4 first downs and a lone score at the end of the first half. Weston Polk led the way defensively, as well as a key interception from Drew Wagner. Drew Minnick, Seth Carethers and Grant Gilbert all contributed to a secondary that shut down the opposition. Player of the game is Edward Griffin.

The Broncos travel to Trinity Springs next Tuesday, September 29th to take on the Eagles of Indian Springs (Keller). Great job, men!!