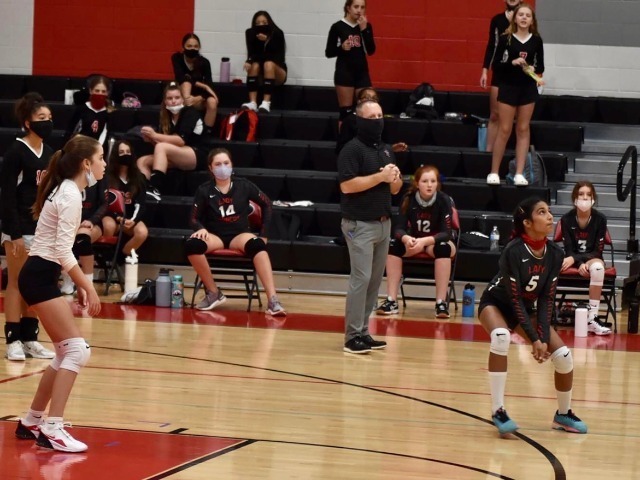 The 7th and 8th East volleyball programs kicked off their 2020 season last Thursday, September 17th by matching up with cross-town rival, Coppell Middle School North. It was a successful night for all 6 East volleyball teams, as each team won the match in only 2 sets, resulting in a clean sweep for the East Broncos.

The 7th grade C team scores for the night were: 25-17 and 25-16. The match started out slow with both sides struggling with the serve. As the games went on, Riley Hazlewood showcased her excellent serving skills. She truly dominated from the service line, earning her C team Player of the Game. As for the 7th grade B team, the game started out close, but the Lady Broncos soon blasted off to beat their foe 25-11 the first game and 25-22 in the second. Berkeley Delgado took control giving the Broncos the edge with her tremendous serving and is named B team Player of the Game. The 7th grade A team traded leads with the North Cougars but in the end, the Lady Broncos proved that they had bigger hearts. The A team defeated the Cougars 25-22 and 25-22. Many athletes played well, but this week’s Player of the Game for 7th grade A team is awarded to Arya Shah for her strong serving, passing and all around great play.

The C team opened the evening for the 8th grade teams by dominating with proficient serving skills. C team was able to secure the win in a quick 2 game match-up with scores: 25-8 and 25-9. The Player of the game is awarded to Tatum Montgomery, who served a combined 15 points and helped pave the way for the Broncos. The B team won their match against the Cougars 25-18 and 25-17. Special recognition goes to Amanda Adams, who put up 11 serves in game 1, and Ellis Summers who served 9 points in game 2. Ellie Dalton receives B team Player of the Game for her aggressive front row play and 3 kill contribution in the match. The A team wrapped up a successful evening by winning in two games with scores: 25-21 and 25-21. Through teamwork, hustle, heart and grit, the A team was able to secure the final match win of the evening. Player of the game was awarded to the entire A team for the determined fight that each athlete showed and coming together as a united front during a competitive and heated match.

This Thursday, September 24th, the Broncos will compete against Keller Vista Ridge Middle school. 7th grade will play on their home court, while the 8th grade teams will travel away for the matches.

Congratulations, to all 7th and 8th East Bronco Volleyball teams on your clean sweep and successful start! What a way to open up the season!