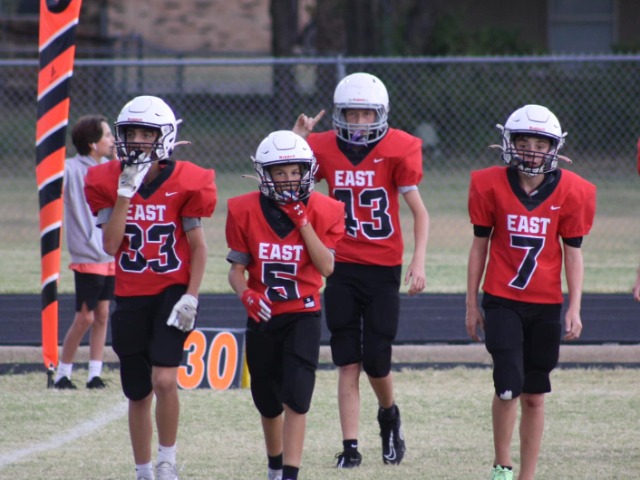 The B team defense proved stellar yet again as they wallered around on them Keller boys. Benjamin Yao sliced on through the O-Line like one of those ginsu knives you see on the 2:00 am infomercials you watch while grading kids' work. He had quite the scoop and score from 60 yards as he ran a stellar blitz.

Noah Schuller also played well having a buttload of tackles and even a few receptions. By the way, buttload is an old English term of measurement. A buttload equaled approximately 384 gallons. Jackson Miller also showed some pretty meritorious tackling as he charged through and had some good plays. B team moves to 2 - 2 on the season.

The A team game was going well until lighting struck both figuratively and literally. The lightning was so fierce all we needed was the DeLorean and 88 mph and we'd be back at the enchantment under the sea dance. Justus Childers connected yet again with Sibu Socks for a 65 yard touchdown. The A team took an unfortunate loss but we look to continue to improve and be ready for next week.

7th B-team played a gritty game, responding multiple times to Keller. Offensively the Broncos were led by Ben Alford, who scored a touchdown from 63 yards to bring the score to 7-6. On the next defensive series, East again took the fight to Keller thanks to a strip and score from Eli Naef to take a 12-7 lead. Jake Conoley provided solid snaps and blocking in his return to the Broncos lineup, but the Broncos ultimately fell to the competition 20-12. Stars of the Game are Gannon Busby and Jake Conoley

7th A-team battled a stout Keller team and struggled to get the offense rolling. Highlights of the night include Eric Anguiano blocking and returning an extra point attempt to the Keller 10-yard line. Diego Rodriguez was once again a stud on special teams, with a booming punt of 40 yards. Rodriguez also contributed defensively at safety, providing lockdown coverage. Jack Kniff and Jackson Echols played both sides of the ball and special teams, rarely leaving the field for the night. Star of the Game is Diego Rodriguez

The Broncos will take on the Hillwood Chargers next week.