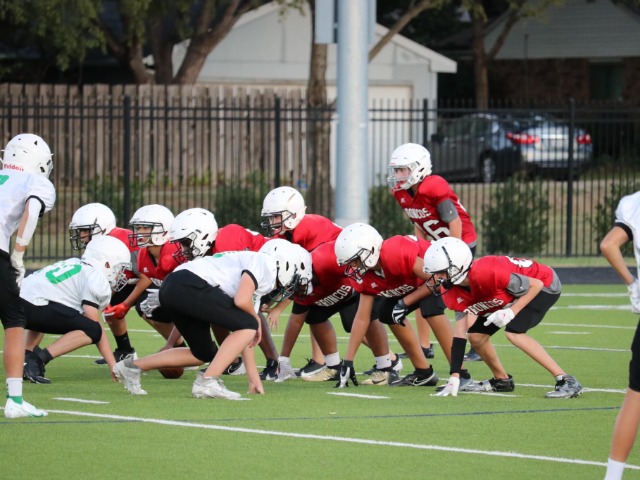 The 7th Grade East Broncos took on the Dawson Dragons on a beautiful Texas fall evening. B-team showed tremendous improvement in their second game as the battled the opponent, thanks to solid defense from Jacob Cavazos. Cavazos made numerous tackles, including a few tackles for loss. Brayden Marrs dominated on both sides of the ball, playing every snap on offense and getting multiple tackles for loss. Ben Alford ran the ball hard and made some big stops on defense. Though the Broncos were markedly better, they fell to the competition. Players of the Game are Jacob Cavazos and Brayden Marrs.

A-team was also much improved over last week, especially on the defensive side of the ball. Jack Kniff made numerous plays including tackles for loss and a tipped ball while Eric Anguiano had another solid game at defensive end. Iron man Jackson Echols was on the field the entire night and made many plays, including a 64-yard run and a 2-yard touchdown run. Ian Wanemna contributed tackles, and Stephen and Jason Medrano were staples of the offensive line. The Broncos fell to the Dragons but look to bounce back against the Wilson Wildcat. Player of the Game is Jackson Echols